– Police were granted order to search his Nairobi house on Friday, May 17

– After he failed, he grabbed a kitchen knife and stabbed himself in the lower abdomen

The prime suspect in the murder of Muranga prison warder the Pauline Wangari, Joseph Otieno Ochieng’ was on Friday, May 17, rushed to Buru Buru hospital after he attempted to commit suicide.

Ochieng’ had been taken to his house in the Nairobi estate by detectives attached to Murang’a Directorate of Criminal Investigations to search for items he is suspected to have stolen from the deceased. 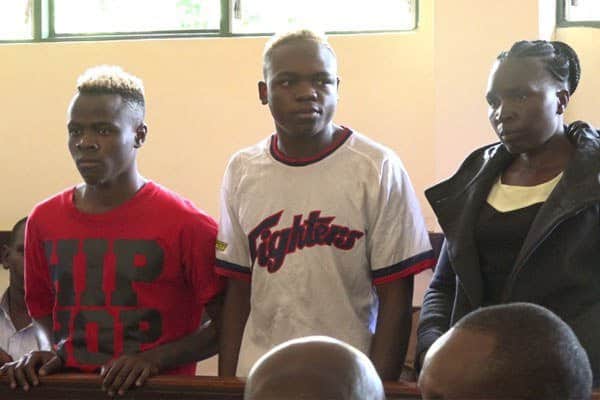 The officers had been granted a search warrant by Muranga Resident Magistrate Sheila Nyaga earlier in the day to conduct the search alongside the homes of two other suspects namely Rodgers Namukhulo and Mary Amollo whom they were arrested together.

The incident has been confirmed to TUKO.co.ke by Muranga County Police Commander Josephat Kinyua who has said the suspect had first attempted to jump from from the balcony of his house and after he failed, he grabbed a kitchen knife and stabbed himself in the lower abdomen.

“His mother fainted after he saw how he survived the first attempt and in the confusion he grabbed a knife and attempted to stab himself,” Kinyua told TUKO.co.ke.

The police commander said he was rushed to a dispensary within Buruburu trading centre for treatment where medics said he is out of danger.

He added that a mobile phone, and a laptop he allegedly stole from the deceased were recovered by police from his house while a television set has been recovered from the home of the second suspect.

Earlier in the day, Namukhulo told a Muranga court that he had a TV in his house brought to him by the suspect who had requested he buys it but after he declined, he told him to keep it as he looks for a buyer.

Story by Mark Wachira, TUKO.co.ke correspondent based in Murang’a county.

How to sign-up to Metropolitan National Sacco, get a loan easily

Opinion: What will the legacy be of an Olympics held during a global pandemic?

Can your overall lifestyle affect your success in work or business?