– Police believe the fake gold racket is made up of unscrupulous businessmen, politicians, rogue police officers, lawyers and judges

The Directorate of Criminal Investigations (DCI) boss George Kinoti has widened the scope of investigation into the multi-billion fake gold scam after shocking discovery of a gold smelting centre in Riara, Nairobi county.

Detectives raided the residential area on Monday, May 21, morning during which they confiscated two gas cylinders, burners and slab-shaped metallic plates that were being used to manufacture the fake gold to be sold to unsuspecting foreign investors. 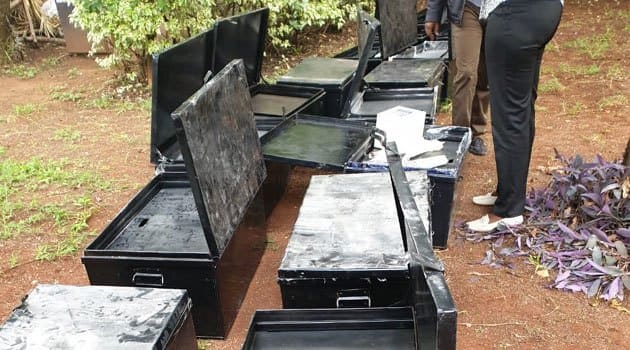 Kinoti explained the metallic plates were melted into ingots and coated with insignificant gold content to make them look like real gold to the prospective buyers who end up being duped into buying the fake bars stuffed with mallet and bags of cement in metallic boxes.

The DCI officers also seized over 30 boxes with varying weights and eight vehicles (two Toyota Axios, two Mercedes Benz, one Toyota Crowne, one Honda Insight, one Toyota Prado Tx and one Subaru Outback) believed to belong to the suspected scammers.

The DCI boss suspects the individuals behind the gold racket include unscrupulous businessmen, politicians, rogue police officers, lawyers and even judges, all of whom are being pursued.

Kinoti warned anyone involved in the fake gold business would not be spared in the crackdown that has now been extended to Dubai after the Saudi royal family complained of delayed export of its gold consignment estimated to be worth KSh 30 billion.

The royal family was represented by Ali Zandi who runs a gold trading company called Zlivia which entered into a business deal with Kenyan businessman and politician Zaheer Jhanda.

Since Kenya is not a gold producing country, Jhanda had reportedly assured Zandi he could source gold from the Democratic Republic of Congo (DRC) and deliver it to him in Dubai, but several months later, the said goods were yet to reach the client.

It was alleged the royal family was disappointed when fake reports emerged the gold consignment was being held by Kenyan authorities at Jomo Kenyatta International Airport (JKIA), reports that Jhanda said were not accurate because, according to him, the goods were yet to leave Congo.

“The company contracted me for my consultancy services, which was purely based on advisory on taxation and exportation of the gold that was to come from the Democratic Republic of Congo,” the 40-year-old businessman said in May 2019 as he defended himself against allegations he was one of the scammers.

As of May 21, at least 15 suspects had been arrested and several others questioned in connection with the gold scam which saw the Dubai royal family lose over KSh 250 million, money that was allegedly paid to facilitate release of the gold from JKIA.

Among those arrested was Jared Otieno alias Gerald Otieno, nabbed during a raid conducted on the dawn on May 16, at his palatial home in Karen, Nairobi.

Otieno’s capture came following arrest of eight other persons of interest including one Congolese, two Tanzanians, one Nigerians and four Kenyans.